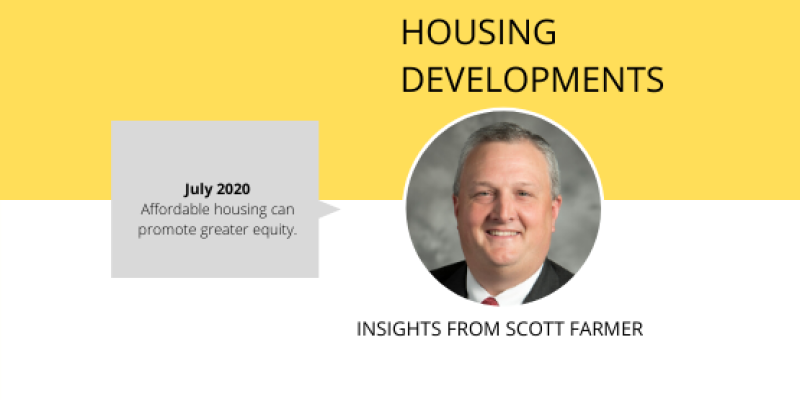 The demonstrations across the world for racial justice and equality have forced us all to face continuing inequities in the distribution of power, economic resources and opportunities. Vast differences exist in wealth across racial groups in the United States, and housing often lies at the root of that imbalance.

While much progress has been made in the ensuing years, the legacy of discrimination in the housing sector has been that not all Americans enjoy the same opportunities when seeking affordable housing. The Black home ownership rate remains largely the same as it was before the passage of the Fair Housing Act, lagging approximately 30% behind the white home ownership rate, according to the Urban Institute.  This gap inhibits the ability of Black households to build wealth, which can negatively impact future generations.

These generations also suffer in other ways when families can’t afford housing in desirable locations, which can limit access to amenities like libraries, greenspace, good schools, transportation and jobs. When communities lack affordable housing options, housing segregation can result and subsequently lead to school segregation since school attendance is often determined by neighborhood. Research from the Institute for Child, Youth and Family Policy at Brandeis University illustrates the results of this, reporting that most white children live in high-opportunity neighborhoods while most Black children live in low-opportunity neighborhoods.

Research from the National Low-Income Housing Coalition indicates that low-income children in affordable housing score better on cognitive development tests than those in unaffordable housing. In fact, growing up in Low-Income Housing Tax Credit (LIHTC) housing has a positive impact on educational attainment and earnings. Each year spent in LIHTC housing as a child is associated with a 3.5% increase in the likelihood of attending college and a 3.2% increase in future earnings.

Great strides have been made in North Carolina, where more than 100,000 apartments have been built for families and seniors with lower incomes and more than 120,000 North Carolinians who had been shut out of the housing market have been able to purchase homes through affordable housing funding. But much more needs to be done. We need significant investments in housing that provides a foundation for people who are being left behind so that they can achieve equality in all other segments of society, including education, employment and health care access.