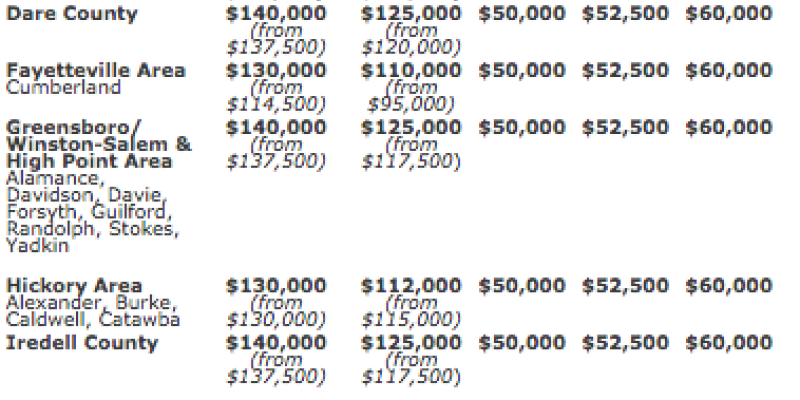 The North Carolina Housing Finance Agency has raised sales price limits statewide for homes purchased using its below-market-rate mortgages. Geared to families of moderate and low income, the mortgages have been used by more than 60,000 first-time homebuyers.

“The higher price limits reflect market changes. We want to make sure that families who qualify for our mortgages can find homes that also qualify,” said Lucius S. Jones, chairman of the board of directors. Jones said that because federal limits had not been updated in more than a decade, his agency had been seeking other means to keep price limits in line with local markets.

The new limits are based on data that the N.C. Housing Finance Agency obtained from the Federal Housing Finance Board. Previously, the agency had been purchasing private market studies to adjust home price limits. Jones said that Congress is considering bills to amend the way the limits are set, but the outcome is uncertain for this year. The agency’s 30-year, fixed-rate mortgages currently have an interest rate of 5.75 percent with zero points. The loans can be FHA-insured, VA- or USDA-guaranteed, or conventional. They are available through a network of local lenders. More information, including a list of participating lenders, maximum incomes, and sales price limits, go to the Low-Interest Home Loans page, or call 919-877-5700 and ask to speak to an underwriter.

The North Carolina Housing Finance Agency is a self-supporting public agency. Since its creation in 1973, the agency has financed more than 126,000 affordable homes and apartments for North Carolina citizens.